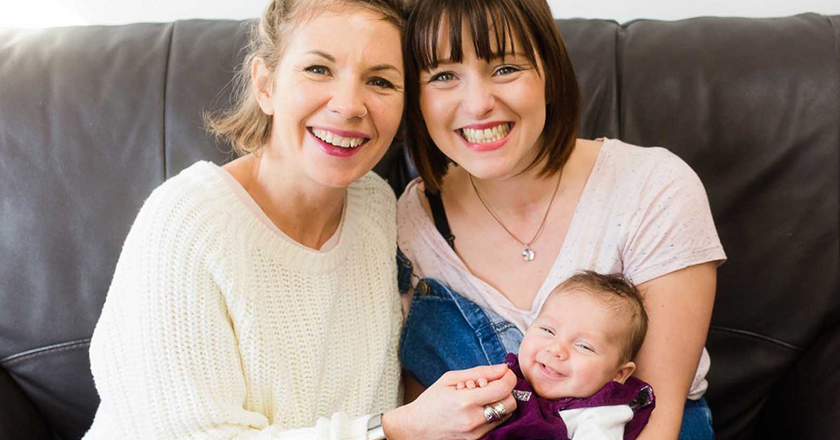 KJ and Abi, both professional dancers from Chichester, always knew that they wanted to start a family together. However, being a same-sex couple, they wanted to find a process that they both could be a part of. Their dream was achieved through fertility treatment and the couple are now besotted parents to beautiful baby Myla.

KJ and Abi met through a shared love of dance. “It’s a funny story really! We both had the same A-level dance teacher but seven years apart. The teacher brought KJ to a show I was in, and that was the beginning of what was to be a long journey of friendship, and then love. We were engaged two years into our relationship, before we moved in with each other, and married after three!” remembers Abi.

"It always felt right to us that we should be donors too, and the process was so rewarding." KJ and Abi

As a same-sex couple who would require a donor to start their family, KJ and Abi decided that they wanted to give something back, by first becoming egg donors themselves. The couple were recommended The Fertility Partnership’s Dr Jacqui Tuckey by their GP, so decided this is where they would begin their journey. With the assistance of the dedicated donor team at the clinic, KJ had a cycle of egg donation, soon followed by Abi.

“It always felt right to us that we should be donors too, and the process was so rewarding, when we found out that my recipient had given birth to a healthy baby, it was a great feeling!” remembers KJ. “It was also a great way to meet the staff at Wessex Fertility who made the process so lovely. Shelley and the donor team were amazing, they knew our bodies so well by the end of the donation process, which really helped when it came to our treatment” adds Abi.

In December 2016, the couple felt ready to start their family and had their initial consultation. One option for the couple was to have eggs from one donated to the other, who would carry the baby, using sperm from a donor. “Where there’s obviously difficulty as a same-sex couple to start a family, there are also lots of lovely options and positive decisions we were able to make as we went through treatment,” remembers Abi.

"When we read his description, we felt like we knew him. His characteristics and interests belonged in the family." KJ and Abi

One of the most important steps of the whole process for KJ and Abi was to choose their sperm donor. “We wanted a donor with medium build and chose the donor who seemed the healthiest to us. When we read his description, we felt like we knew him, and his characteristics and interests belonged in the family” remembers Abi.

Abi began stimulation before having her eggs collected. Abi’s eggs were then mixed with the donor sperm to fertilise and form embryos. In April 2017, one of the couple’s embryos was transferred to KJ’s womb. “We really felt like we’d shared the experience, with one of us going through the egg collection, and the other carrying our baby” remembers KJ.

After the two-week wait to discover if their treatment had been successful, the couple thankfully received the news they had been hoping for. “We took the test one day early, we felt we had been successful, I just felt like the embryo had implanted. We were so happy when we saw the positive test!” recalls KJ.

It took the couple a while to get settled into the pregnancy. “I’m more the worrier. I don’t think I settled properly until I was about 30 weeks pregnant” remembers KJ. The couple were delighted to discover they were expecting a little girl.

On 30th December 2017, KJ gave birth to a baby girl, named Myla, weighing 6lb 12oz. “Myla is just amazing. You hear all these stories about what you will feel like on the day of the birth, but nothing could prepare me for the rush of unconditional love I felt when Myla was first placed on KJ’s chest. After seeing KJ in all that pain and nightmares I had about not recognising my baby, it all just melted away. I thought, I know she’s mine and I recognise her” remembers Abi. “The beauty of it is that Myla looks just like Abi! We couldn’t imagine life without her now, she’s just wonderful” adds KJ.

"IVF can be a sore subject, but… it’s been the most amazing experience." KJ and Abi

The couple feel very positive about their IVF experience using donor sperm. “We would absolutely consider having another baby…IVF can be a sore subject, but we feel so positive about it now, it’s been the most amazing experience”.

KJ and Abi are enjoying life with their beautiful baby Myla.

When we read his description, we felt like we knew him. His characteristics and interests belonged in the family.