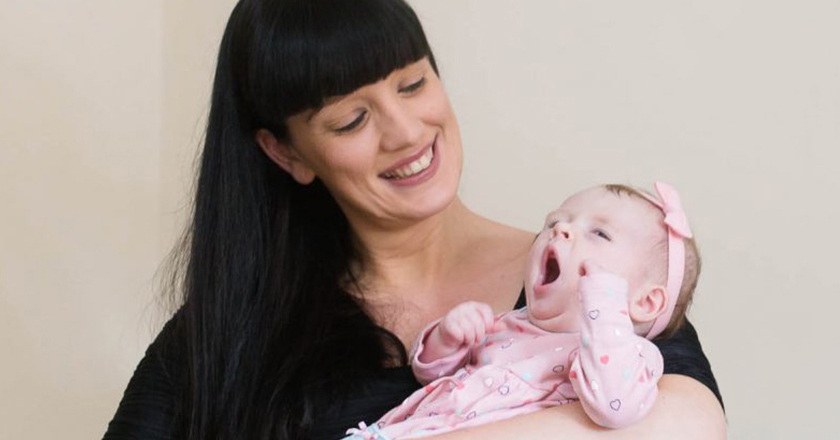 After a series of problems relating to her fertility, Kate decided to take matters into her own hands through IVF treatment as a single lady using donor sperm. Kate is now a proud mother to her beautiful baby girl, Lily-Mae.

Kate’s fertility journey begun at an early age, upon discovering that she unfortunately suffered from both endometriosis and polycystic ovaries. “I later also found out I had a damaged fallopian tube which later had to be removed, with my second tube severely damaged from a previous illness.” In November 2016, Kate decided to have an initial consultation with The Fertility Partnership to discuss her options for a baby in the future. “I originally went to freeze my eggs, but I decided that my best chance of having a baby was to begin IVF treatment with donor sperm” remembers Kate.

Kate chose her sperm donor with the help of The Fertility Partnership’s dedicated donor programme. “The process was easy and welcoming. I knew my donor had fathered children before, so I knew there may not be an issue from that end,” remembers Kate.

"To hold Lily-Mae in my arms felt amazing. She is a delight and my little miracle!" Kate

In January 2017, Kate began her stimulation injections in the build up to her egg collection. “The doctor collected a high number of eggs which successfully formed nine embryos!” recalls Kate joyfully. “I chose not to read too much into procedures and individual IVF cases. I kept my body and mind healthy before, during and after the treatment and I do believe it helped me.”

In March 2017 Kate commenced her frozen cycle. She was then given further medication to prepare for the embryo transfer. On 20th April 2017, Kate was finally able to have one of her frozen embryos thawed and transferred to her womb. After a two week wait to discover if her treatment had been successful, Kate finally got the news she was hoping for. “I took the test, and it came out positive! I couldn’t believe it was real. To this day I still have my two pregnancy tests” remembers Kate.

Kate embarked on her pregnancy and nine months later gave birth to a baby girl, Lily-Mae, weighing 8lb 3oz. “To hold Lily-Mae in my arms felt amazing. I had a pretty traumatic delivery and wasn’t well post-pregnancy, but she is a delight and my little miracle!”

If I could advise others going through the same as me, I would say do not read too much on the internet from forums or old websites. I just kept positive, kept my body clean and hoped for the best”.

Kate is now enjoying life with her beautiful Lily-Mae.

To hold Lily-Mae in my arms felt amazing. She is a delight and my little miracle!